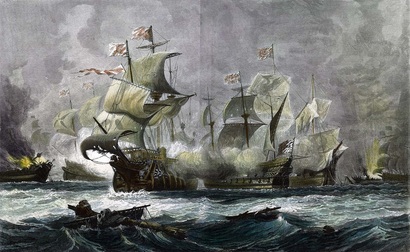 In 1588, the order of King Philip ll was that 3000 sailors went out to sea. Large ships and deaths came from a fleet that was assembled. In May of 1588, ships were sent to Spain because of a massive fleet. The reclaim of England for the catholic church had King Philip ll of Spain launch a fleet of crowned galleons that could stretch between Spanish navy  to beat down England. The rebellion already faltering and was repressed. Spainiards killed and the remainder surrendered. The Armada defeat and the privateering what preceed it and continued long after 1588 was much more decisive. The peace of vervins was signed in April. 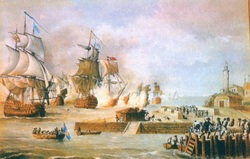 After Spain's success and the death of the leaders of the Low Countries rebellion, Elizabeth feared Philip II would try to isolate England, so decided to intervene in favour of the rebellion, with the aim to wear out Spain. The Queen contributed 6000 soldiers of her army, under the command of the Count of Leicester. Despite the fact that the British army was completely defeated, the help given by Elizabeth, along with piracy and destruction of coastal cities provoked the Spanish king's attempt to invade England with his invincible Spanish armada. It would be the hardest lesson the Spanish would learn.
Powered by